You have no pinned items. 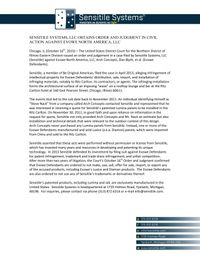 SENSITILE SYSTEMS, LLC OBTAINS ORDER AND JUDGMENT IN CIVIL ACTION AGAINST EVOWE NORTH AMERICA, LLC Chicago, IL (October 16th, 2015) – The United States District Court for the Northern District of Illinois Eastern Division issued an order and judgement in a case filed by Sensitile Systems, LLC (Sensitile) against Evowe North America, LLC, Arch Concepts, Dan Blyth, et al. (Evowe Defendants). Sensitile, a member of Be Original Americas, filed the case in April 2013, alleging infringement of intellectual property for Evowe Defendants’ distribution, sale, import, and installation of infringing materials, notably to Ritz Carlton, its contractors, or agents. The infringing installation forms the architectural surface of an imposing “wave” on a rooftop lounge and bar at the Ritz Carlton hotel at 160 East Pearson Street, Chicago, Illinois 60611. The events that led to the suit date back to November 2011. An individual identifying himself as “Steve Nack” from a company called Arch Concepts contacted Sensitile and represented that he was interested in receiving a quote for Sensitile’s patented Lumina panels to be installed in the Ritz Carlton. On November 30, 2011, in good faith and upon reliance on information in the request for quote, Sensitile not only provided Arch Concepts and Mr. Nack an estimate but also installation and technical details that were relevant to the outdoor context of this design. Arch Concepts never purchased any Lumina panels from Sensitile. Instead, one or more of the Evowe Defendants manufactured and sold Luxice (a.k.a. Diamon) panels, which were imported from China and sold to the Ritz Carlton. Sensitile asserted that these acts were performed without permission or license from Sensitile, which has invested many years and resources in developing and patenting its unique technology. In 2013 Sensitile defended its investment by filing suit against Evowe Defendants for patent infringement, trademark and trade dress infringement, and unfair competition. After more than two years of litigation, the Court’s October 16th Order and Judgment confirmed that Evowe Defendants are ordered to not make, use, sell, offer for sale, import, or export any of the accused products, including Evowe’s Luxice and Diamon products. The Evowe Defendants are also ordered to not use any of Sensitile’s trademarks or derivatives thereof. Sensitile’s patented products, including Lumina and Jali, are exclusively manufactured in the United States. Sensitile Systems is headquartered at 1735 Holmes Road, Ypsilanti, Michigan, 48198. For inquiries, please contact via phone (313) 872 6314 or e-mail info@sensitile.com.